Waubgeshig Rice on the Art of Keeping Readers in Suspense 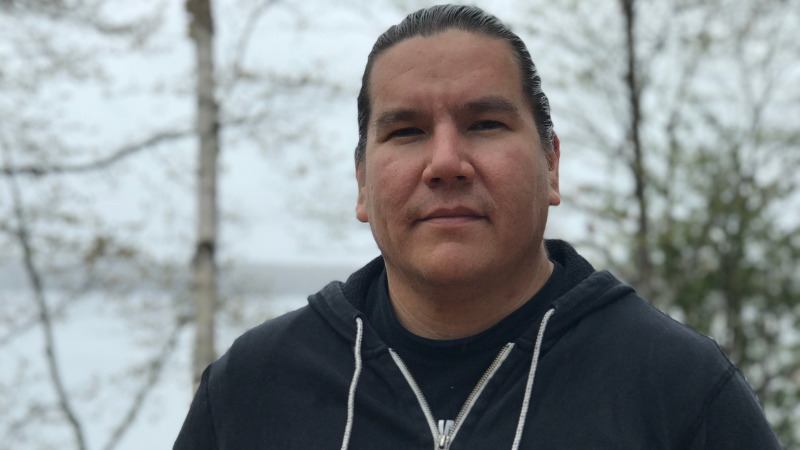 Waubgeshig Rice knows how to keep you on your toes.

His ability to craft compelling tension and suspense is on full display in his most recent novel, Moon of the Crusted Snow, which became a bestseller in 2018. The speculative fiction thriller will have you in an iron grip, as you follow a northern Anishinaabe community grappling with apocalyptic tragedy.

Waubgeshig drew on his own roots in the Wasauksing First Nation to write it. But his penchant for getting to the point and writing lean, muscular sentences were developed during Waubgeshig’s career as a CBC journalist, including hosting Up North, the afternoon show for northern Ontario.

Waubgeshig left the CBC in May 2020 to write novels full-time.

If you’re also trying to make the leap to novelist, sign up for one of two Pandemic U masterclasses with Waubgeshig.

The first, Secrets of the Page-Turning Novel, is on Apr. 20 at 1pm ET. The second, Planning the Novel, is Apr. 30 at 1pm ET. As always, if you can’t make it, you can catch the replay later. Registration for both are by donation, which full proceeds of the latter going to the Kemosa Scholarship for First Nations, Métis and Inuit Mothers Who Write.

In the meantime, we asked Waubgeshig about his biggest sources of inspiration, the worst mistake writers trying to build suspense make, and how journalism helped him write better fiction.

Did working as a journalist for so many years prepare you for writing fiction?

The best thing about being a journalist is meeting different people every day and sharing their stories. That provides such a broad perspective of the human experience. When someone entrusts you with sharing their story with a wider audience, it’s a huge honour and responsibility. As a result, you learn more about humanity, and how people respond to different situations and each other. I can think of no greater benefit to my literary career than the spectrum of people I got to meet and talk to as a journalist. That greatly influenced and inspired how I develop characters and their stories in fiction.

The second major thing I took away from my journalism career to apply to literary projects was how to write concisely and economically. When you’re writing a suspenseful story, you need to maintain a decent pace to keep the reader’s attention.

Journalism is all about getting to the point, while trying to keep an audience captivated. As my fiction writing developed over the years, I tried to apply some of those same principles to prose, and I found them really effective in carrying a fast-paced narrative. Shorter, punchier sentences that journalists often use in different news media can work really well in fiction.

Journalism is all about getting to the point, while trying to keep an audience captivated.

Your recent novel, Moon of the Crusted Snow, takes place in a post-apocalyptic world. Why did you choose that setting, and how did you keep the tension building authentically as things just keep getting worse and worse?

Moon of the Crusted Snow is about a northern Anishinaabe community dealing with a world-ending event. But it’s important to remember that the real world we all inhabit is already post-apocalyptic for Indigenous nations everywhere. They’ve been removed from their homelands and their cultures have been brutalized as a result of settler colonialism. The list goes on. So by choosing to write in the post-apocalyptic genre, I wanted to explore that a little more deeply.

The community in the novel is already surviving the aftermath of displacement, child removal, and so on, but then they’re confronted with another invasion by city dwellers from the south, and they have to make some tough decisions about their future. So there’s already an inherent tension in just existing as an Indigenous person in modern settler states. I just tried to peel back the curtain in different ways to expose the challenges and triumphs of that reality.

What are your strategies for when you’re not feeling creative?

My biggest sources of inspiration are the Anishinaabe stories I heard as a kid that firmly connected me to my culture and history. I grew up during a time in the 1980s when my home community of Wasauksing First Nation was reviving a lot of the old ways that were either outlawed or taken from us. So to know that people worked hard and made big sacrifices over many generations to ensure that people like me were raised with the knowledge we have today is hugely empowering and inspiring.

I am a result of this storytelling tradition, and I take that responsibility very seriously and proudly. And by extension, passing some of these stories and traditions on to my own kids is a major source of inspiration. I document and share these ways for them and future generations.

When I’m not feeling creative, I always go outside to enjoy and appreciate the land around me. I often walk to get moving and breathe the air and clear my head. Otherwise spending time with my wife and sons is always special, and those moments always inspire me.

What’s one mistake newer writers make when trying to add suspense to their work? Do you look back at any of your old pieces now and groan?

A mistake I often made when I was a fledgling writer was revealing too much too soon. If you’re trying to build tension in your story, you have to reveal things gradually, while writing at an engaging pace. It’s a really tough balance to accomplish, but I’ve had great editors and writing peers over the years help me find that effective combination.

The other challenge attached to that is maintaining that mystique in a believable way. If a reader can see through the cloak you’re trying to weave early on, they’re not going to want to stick around to the end of the story. So that’s why it’s always good to get as many eyes as possible on something you’re writing, just to make sure you can tighten everything up. Having other readers review your work when it’s still in the draft stages is essential. I’m thankful for everyone who’s done that for me along my journey!

If a reader can see through the cloak you’re trying to weave early on, they’re not going to want to stick around to the end of the story.

An excellent piece of advice I was given early in the pandemic was not to fret over my email inbox. In this hyper-digital time, people have been emailing and connecting virtually in unprecedented ways. I felt the pressure early on to reply to everything immediately.

I expressed that concern on Twitter, and many people responded with kind advice, like reminding me that most email doesn’t require a response right away. So by relaxing my own grip on my inbox, I’ve become a bit more productive. I designate certain times of the day and the week to responding to email, rather than randomly writing back in any free moment. That frees up more time to focus on my fiction, which has been very liberating.

I’ve made some significant progress on my next novel — the sequel to Moon of the Crusted Snow — because that is my writing priority, not email.