What It's Really like to Be a Foreign Correspondent in 2021 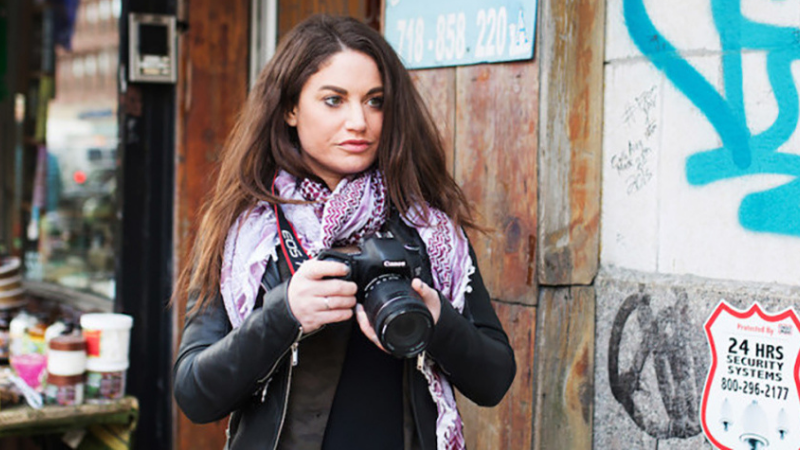 Unfortunately, Sulome Anderson has had to cancel her session scheduled for this Monday on how to start out as a foreign correspondent in today’s media environment due.

Sulome kindly provided a statement about the difficult reasons for her cancellation, which we hope you’ll read. We wish her the best and are thankful for her intention to teach at Pandemic U.

If you have any questions, email us at info@pandemicuniversity.com.

Sulome Anderson earned her journalism stripes reporting on the war in Iraq, the rise and fall of the Islamic State, child suicide among Syrian refugees, and anti-government protests in Egypt and Turkey.

Whether she’s filing from Beirut, New York, or anywhere in between, the freelance foreign correspondent never misses the human element. It’s apparent in her work across a dizzying list of media outlets, including The Atlantic, The Washington Post, Newsweek, Esquire, and, naturally, Foreign Policy.

But if there’s a crowning achievement in her still-young career — and a window into her worldview — it’s her award-winning book The Hostage’s Daughter. Written with a gripping blend of reportage, memoir, and analysis, it details her search for the men who famously held her father, American journalist Terry Anderson, captive during Lebanon’s hostage crisis, a 10-year period between 1982 and 1992 when more than 100 foreigners were kidnapped for prisoner and political exchanges.

Sulome is teaching her methods for safe, ethical, and financially sustainable foreign journalism this Monday. A 90-minute workshop created for Pandemic U, International Reporting in Today’s Media Environment is live on Apr. 19 at 1pm ET, or you can catch the replay later. Registration is by donation — just pay what you can.

Until then, we asked her about the shift in the foreign media landscape since her days as a cub reporter, how she constructs vivid scenes in her work, and the decline of the reporter-editor relationship.

What’s a misconception you had about foreign correspondence as a young reporter that turned out to be untrue?

As the child of foreign correspondents of a different generation, my misconceptions as a young reporter were mostly that entering the field when I did would be comparable to the days my parents were working. Back then, everyone had expense accounts, and the entire industry was quite different. Print advertising was lucrative, staff jobs were plentiful, and there was a much stronger sense of ethics in the way the industry treated its talent.

These days, dealing with editors as a freelancer is a real challenge, because journalism as a business model is suffering so much. There are very few industry standards regarding how we can be treated, so there’s a lot of exploitation and disrespect that happens, which I was not entirely prepared for.

The interesting thing about people, I’ve found, is that everyone wants to be understood, on some level — even the most evil of them.

What has been the biggest shift in today’s foreign media environment since the time you started out?

I wish I had a more upbeat way of phrasing this, but the only shift I’ve seen in the foreign media environment since I started in 2011 has been downward. It’s becoming progressively more difficult to maintain interest from editors and readers — particularly following the Trump administration, which prompted an already navel-gazing U.S. media to become even more obsessed with domestic news, at the expense of anything happening in other countries.

There are some exciting new projects, such as Newlines magazine, that are trying to fill that gap, but the U.S. media in general should be focusing much more resources and talent on covering news that happens outside of America.

How valuable are strong reporter-editor relationships in foreign correspondence?

They should be extremely valuable. Again, in my parents’ time as journalists, the reporter-editor dynamic was crucial. I’m sure it still is, for the dwindling number of staff foreign correspondents, but as a freelancer, that relationship is practically nonexistent now.

Most editors now almost expect you to have the piece mostly reported before they will even accept the pitch. You have to chase them around for months sometimes to pay you a meager fee (no expenses, of course), and they show next to no interest in our personal safety. I’ve had editors flat-out tell me they can’t commit to a conflict pitch before I go out into the field for liability reasons, but they would be happy to look at the piece once I’m out of danger, and they are no longer responsible for my welfare. Really, the state of affairs in that regard is astonishingly bad, and should be addressed.

I’ve had editors flat-out tell me they can’t commit to a conflict pitch before I go out into the field for liability reasons, but they would be happy to look at the piece once I’m out of danger, and they are no longer responsible for my welfare.

Your stories, such as “‘Women Survive. They Do Not Live.’“ for Foreign Policy, are filled with vivid scenes that seem almost surreal. How long did it take you to work up to that kind of writing and access?

You know, access is a funny thing. I think part of being good at getting people to let you in places you’re not supposed to be and tell you things they may not be naturally inclined to is not something you can necessarily teach.

Part of it is just being an open, curious person who constantly talks to everyone I meet, and being good at putting people at ease. Empathy always helps, especially with people who have been victimized. I do everything in my power to treat traumatized subjects ethically and protect their identities, for moral reasons, but also because people will always be more likely to tell you things if they A) can tell you sincerely care about their experience, at least on some level and B) feel safe around you.

When it comes to interviewing baddies like terrorists, I try to keep in mind that they are also human, despite how much I disapprove of the things they have done, and try to show them I sincerely want to understand who they are, and how they came to be that way. The interesting thing about people, I’ve found, is that everyone wants to be understood, on some level — even the most evil of them.

The pandemic hasn’t been a great experience for me, professionally, but I have to say that it has really given me the time and headspace to help me sort through a lot of my personal traumas and issues, which, I think, can only help me do my job better, as a journalist.